Marking the next phase of Alvin Ailey Dance Foundation’s upward growth, construction workers were busily completing the stunning building expansion of the center’s new Elaine Wynn & Family Education Wing. For the past year, the corner of New York City’s 55th Street and 9th Avenue had come alive with the hum of cranes and power tools. Dancers in leotards carrying shoulder-hung dance bags weaved through an assemblage of workers as they made their way through the entrance of The Joan Weill Center for Dance — the building that has been home to New York’s most prominent dance community since 2005 — Alvin Ailey American Dance Theater.

THE DESIGN
The new Education Wing was designed by Iu + Bibliowicz Architects, the designers of the dance center’s original building in 2005. Driven by the ever-increasing demand for Ailey’s education initiatives, the new wing adds three floors and 10,000 sq. ft. to the west side of the building. The space is comprised of four new dance studios, two new classrooms, and administrative office space.

THE CHALLENGES: Where to find partitions large enough to fit the massive dance studio that provide outstanding acoustical properties and meet minimal storage needs, and how to get 14 ft. panels up to the sixth floor with 10 ft. mirror facades applied.

Acoustics and Layout
“Sound rating is a key factor in the design” explained Senior Project Architect Harold Gross. So the walls had to have the highest possible sound rating. The great studio on the sixth floor, which can also be used as an event space or photography studio, is designed so the 2,700 sq. ft. space can be converted into two dance studios by means of a mirrored operable wall. However, the design did present some challenges. The walls needed to fit the huge scale of the room and be stored in a way that uses minimal space. “ModernfoldStyles was the only company that could supply the required wall layout with the highest acoustical rating.” Mr. Gross concluded.

With mirrors applied, each of the twelve steel Encore panels weigh about 900 lbs. Although heavy and structurally robust, the panels glide effortlessly on the structural steel-supported ceiling track with no floor tracks required.

Logistics
A major logistical challenge was getting the 14 ft. panels up to the sixth floor. Structure Tone Inc.’s construction manager, William Murphy, worked with the ModernfoldStyles project management team to lift crates of panels up to the unfinished sixth floor by crane. The bare panels were hung on their tracks until the studio’s engineered sprung dance floor was installed. Then mirrors were applied and the wall trimmed and caulked. 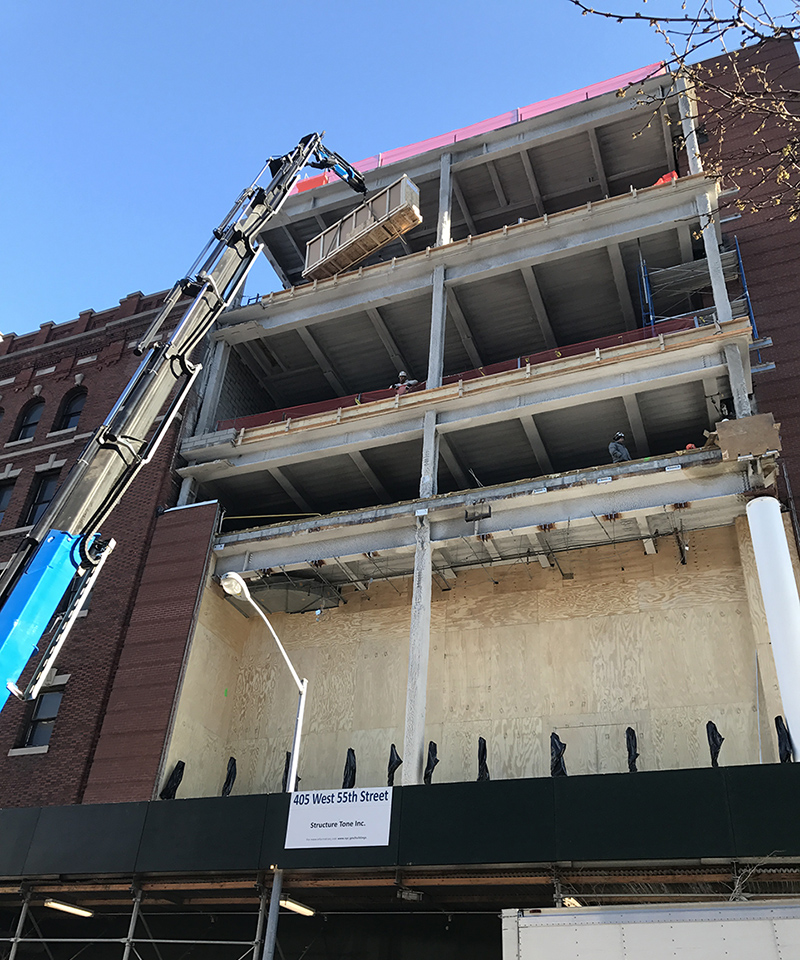 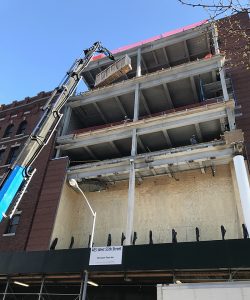 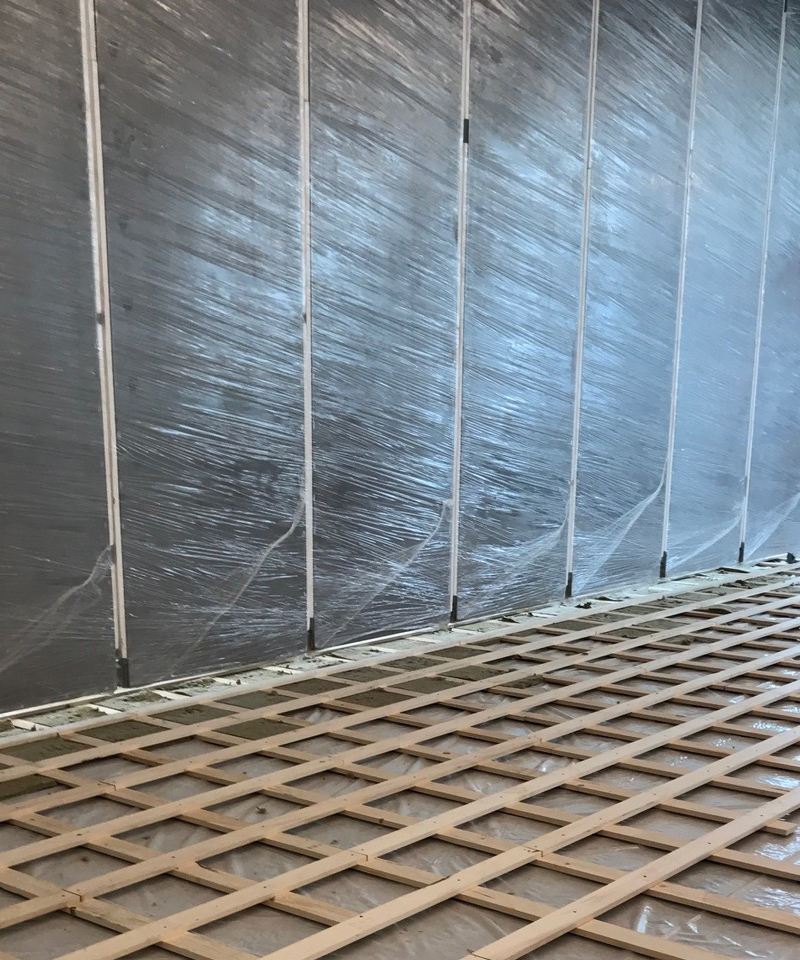 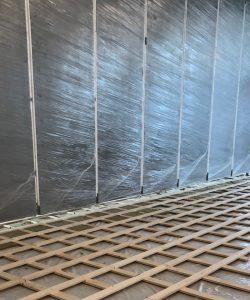 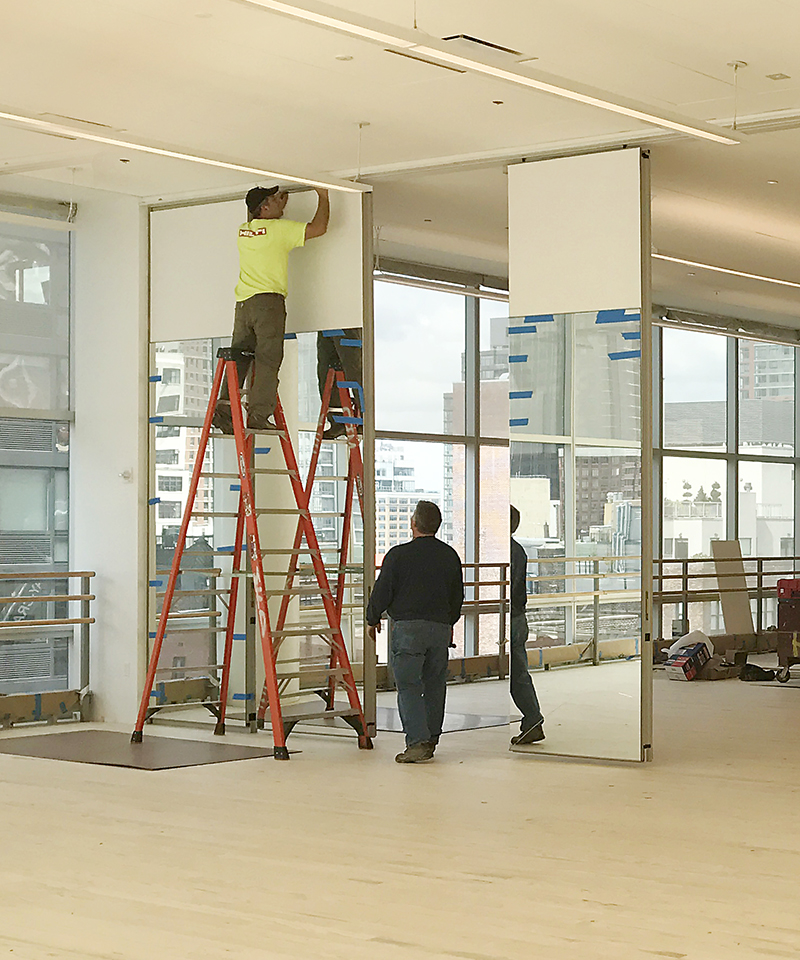 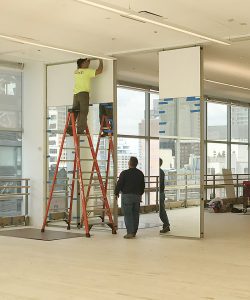 In addition to the panels in the main dance studio, a second, smaller Modernfold Encore Paired Panel system (56 STC) was installed on the fourth floor. This system easily divides one large classroom into two smaller rooms as needed. The panels establish Ailey’s creative space, whether open for an educational presentation or closed for concentrated study.

The dynamic wing opened in October 2017, in time for a new season of programs, premieres and events. Reflecting on the journey, Executive Director Bennett Rink acknowledged that a project of this magnitude had not been a solo effort, saying, “We are deeply grateful to Sandy and Joan Weill whose extraordinary leadership started this incredible journey, and to Elaine Wynn and her family for the exceptional support that will allow Ailey to take another great leap upward.” 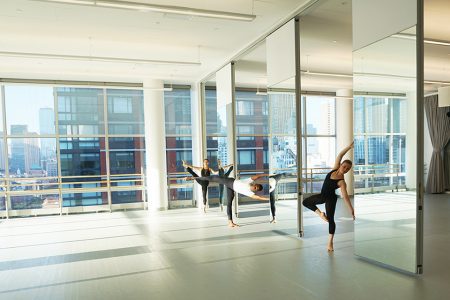 “ModernfoldStyles was the only company that could supply the required wall layout with the highest acoustical rating.”

The Key to Future-Proof Design is Flexible Space
May 11, 2021